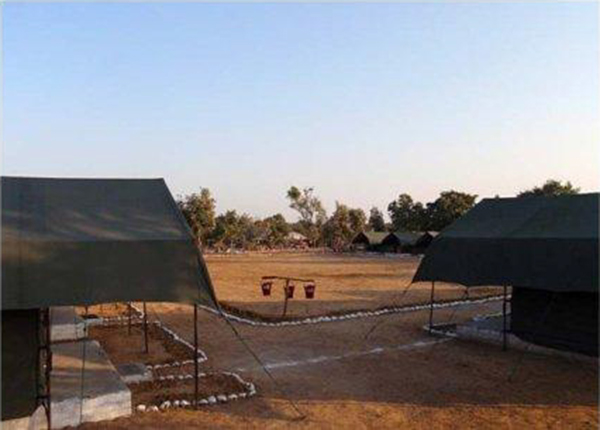 Camp Blue Bull, an adventure camp in Orchha, Madhya Pradesh, is set up by the Betwa River. This camp offers guests an opportunity to combine the thrill of adventure with the rich cultural heritage of the region.

The name Orchha literally translates to “hidden”. True to its name, Orchha lies obscured from sight amidst lush green dark woods along the Betwa river. The rambling ruins of Orchha have many a tale to tell. Legend has it that Orchha was founded in the 16th century by the Bundela Rajput ruler, Rudra Pratap Singh when his capital Garhkurar fell to the Tughlaqs. In 1525, the ruler Raja Rudra Pratap decided on “hidden” Orchha as his capital as he wanted to protect his headquarters from further invasion. His successors reigned till 1783 in this state after which their capital moved to Tikamgarh. A destination on the cultural circuit, Orchha is easily accessible from Jhansi, Gwalior, and Khajuraho.

The Betwa and Jamini Rivers and forests nearby make Orchha an adventurer’s paradise. Betwa river starts from the Vindhya Range and empties itself into the Yamuna. The river is wide and its placid flow is intermittently broken by Grade I to Grade II rapids. The river is a kayaker’s dream and for those looking for some easy rafting. A thickly forested island that has formed between the Betwa and the Jamini rivers offers some exciting cycling/ hiking trails. The rock faces at the island are ideal for easy to moderate rock climbing/ rappelling/ bouldering while the forest trails are a nature lover’s heaven. The Orchha Nature Reserve, home to over 200 species of birds, also offers great trails for jeep safaris and cycling. Though tigers once roamed here freely, wild boar, blue bull, and sloth bears are easier to spot now.

Accommodation at the camp is in comfortably done up safari tents and as usual safety, service and minimum impact tourism are indelible parts of Snow Leopard Adventures operations in Orchha.

The nearest railhead to Orchha is Jhansi. Orchha is about a 1-hour drive from Jhansi. The recommended train from Delhi to Jhansi is the Bhopal Shatabdi Express train.